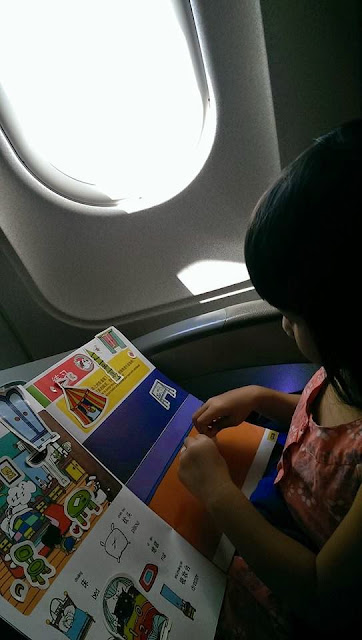 Tiger Girl on the plane

Travelling with kids can be a really daunting task. You never know what to expect and there are too many unpredictable factors involved.

Normally we travel together as a family however this time  R had some changes to his work schedule and was unable to travel together with us. We had to fly  in to Hong Kong first and he would meet up with us a few day later.

It was the first time travelling solo with the kids and I was quite apprehensive at first as there was certainly a lot of things to take note together with an increase in technical  difficulties involved with travelling with both boys and girls.

Even though the kids are frequent travelers travelling  without their dad means that I have  one less pair of helping hands and supervising eyes.  I have to make sure that everything that we were travelling with remains intact and none of the kids go missing during transit. 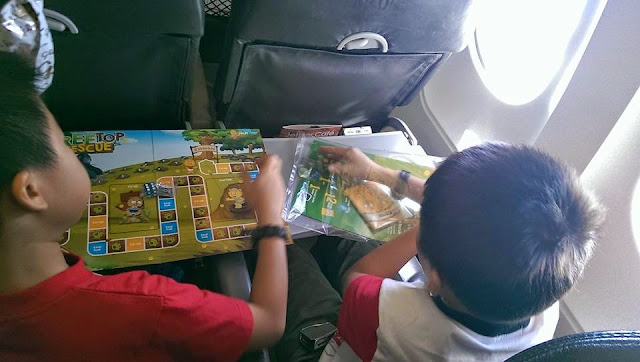 The boys playing a board game in-flight

To help myself have a relatively stress-free flight I briefed the kids on what is expected of them and what we would be doing on the flight.

We  traveled on a budget airline  so there wasn’t any frills like video games or movies to watch in flight. The kids had the option to entertain themselves or sleep during  the whole 3.5 hr flight.  I deliberately chose a daytime flight  needed the boys to remain alert during the flight/trip so that there would be less hassle for me dealing with one sleepy toddler then  three sleepy and cranky kids.

Here are my  tips on how to travel and remain sane.

1.  Pack a variety of items for each kid in their own backpack.

The boys had their own carry on backpack which was equipped with magazines, games, crossword puzzles, sketch pad and an exercise book which was to be use as their journal.  I also packed  storybooks and activity books to occupy the girl.  The kids also had their own jackets, sunglasses , tissues, snacks and some loose change on them which they can take out and use at their own discretion.

2. Brief the kids on the travelling procedures.

As we were travelling to a very populated place I set some new ground rules for the kids.

Rule Number One – You are not to be more then 1/2 metre away from me at ALL TIMES.

It is very easy for the kids to get lost in a crowd so they have to be within arm reach so that I will be able to react fast enough if needed.

Rule Number Two- You are to take care of your own backpack and assigned suitcase.

Each boy was given a suitcase to pull along and take care of for the entire trip.  This left me hands free to carry the girl and sort out check-in procedures at the airport.

Have you experience travelling solo with your kids ?