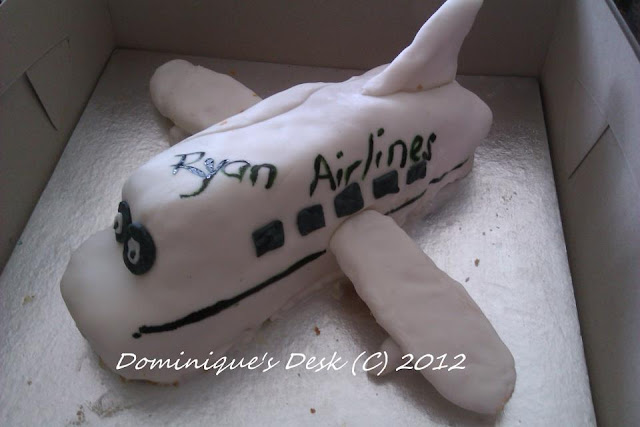 Come Monday the 5th of March we will be celebrating my eldest boy’s 8th birthday.  This year he has requested for an Aeroplane cake for his birthday. He specified that he wanted it to be a Ryan Airlines plane and to look like the model airplane which we have in the house.

It really wasn’t that easy to create the plane and I had to redo the wings a few times as they broke in the process. In the end I substituted baby biscuit for cake and it manage to hold up without having to put extra “support” inside the cake.  It was a really rush job as I actually intended to decorate the cake after the kids went to sleep at night but they only went to bed at 11pm which was way past their bedtime. In the end I decided to wake up early and decorate the cake the next morning. Who knew that these energizer bunnies would wake up too at 7am and make such a din playing around making it extremely hard for me to concentrate on decorating the cake and getting them settled for breakfast before going off for their Saturday morning swimming lesson.

This is not one of my best cake decorations. The Angry bird cake which I made for Doggie boy’s 5th birthday back in December was better planned out and it looked much better. R said that it did look good given that it took me about 1.5hrs to finish getting the cake done  and everyone enjoyed eating it.

Monkey boy got his wish of an Aeroplane cake and had the toys/books which he wanted. He too got to eat his favourite Japanese food and had a great 8th birthday celebration.