Writer’s Workshop: U Never Thought of it 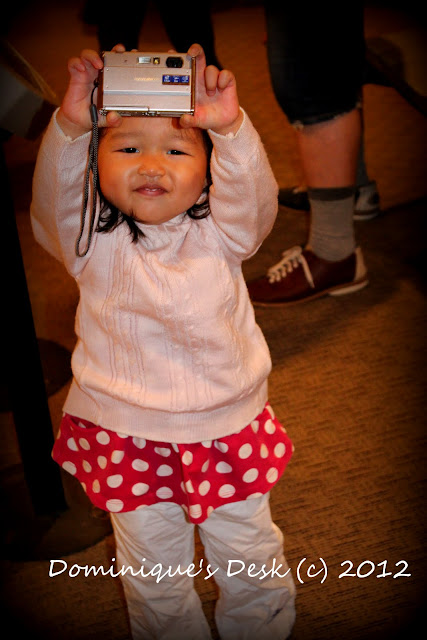 [from the mouth of my 2yr old Tiger girl]

Tiger Girl: ” Give Me!! Give Me!!” gesturing for the camera.

She chases her brother all around the bowling alley for the camera screaming and shouting for the item. Tear streaming down her face feeling frustrated that she is not getting what she demands.

I not getting the camera and I really , really want it!!

She drags me over to where her brother is and points to him yelling “I want!!!”

She shows me her puppy dog eyes and dramatically acts out being bullied by her brothers to emphasis the point that she is being disadvantaged by not having the camera.

Taking pity on her and knowing that in the next 15 minutes or so Monkey boy would be busy playing bowling to take pictures anyway I took the camera and give it to her.

Within seconds her face changes from an angry growl to a happy smile. Delighted that she had FINALLY got what she wanted.

Just look at her expression in the photograph above.

This metalic pocket size gadget has been the item which has cause scream and shouts coming from Tiger girl. It has been the object of desire since she saw her brothers using it. The  Olympus camera which she is handling was bought for  Monkey boy back then as his 5th birthday present. I specifically bought a TOUGH camera which is waterproof and drop proof for him as I know how rough kids can be with cameras.

Back in 2009 I did a series on introducing photography to kids as Monkey boy was interested to know more about the camera and taking photographs. Little did I know fast forward to 2012 and all 3 kids are camera crazy.

Do you kids love taking pictures too?

Will they also fight for the camera?

101 on the need for Handwashing Yellow on a Friday