During the weekend we were invited to The City at Liang Court to check out their newly opened play city. There were a few interactive stations for the kids to try out.  We were there when the place open so the kids had free reign of where they wanted to go.

After registering the kids they dashed off to the most captivating part of the playground- The supermarket. 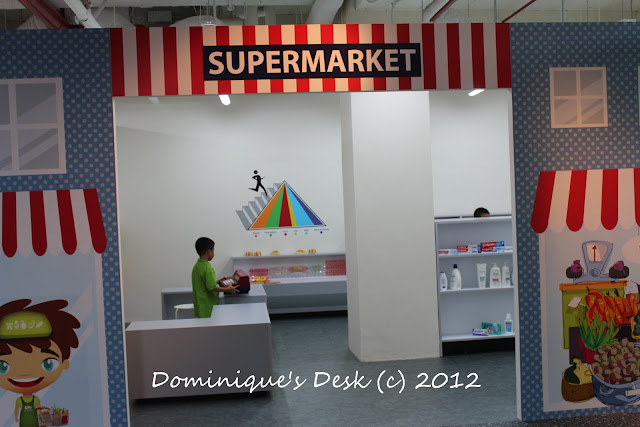 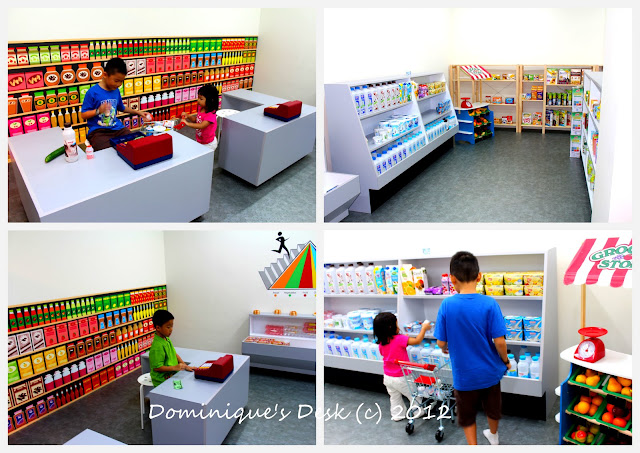 Checking out the Supermarket

The boys took on the role of the cashiers while their little sister  played the role of the shopper.  Tiger girl enjoyed loading up the mini shopping cart with her favourite foods and drinks.  You should have seen her loading the cart with bottles of yakult, cheese, vegetables and fruits!!

They had a wide selection of produce for the kids to select and buy and the layout was similar to that of a real supermarket.

The items on the shelves were not clearly labelled and  it would be great if they would state the different sections for the various items on sale like Green vegetables, Diary, Chilled food etc.

There wasn’t even price tags or bar codes on the items and the boys didn’t know how to charge their sister for the items that she purchased. In end the cashier , Monkey boy, decided to run the store like a $2 store and place a flat rate on all the items bought by his sister.

There is no clear direction of the flow of traffic within the supermarket and the shoppers  didn’t know where to park their trolley at the check out counter when handling their purchases over to the cashier. As you can see from the photo above Tiger girl should have her trolley to the left of Monkey boy instead of the right where she placed it at the check out.

Even though the kids are encourage to interact with each other on their own I still think that there should be rules and regulations placed clearly at the entrance of each play area for both parents and kids to view. 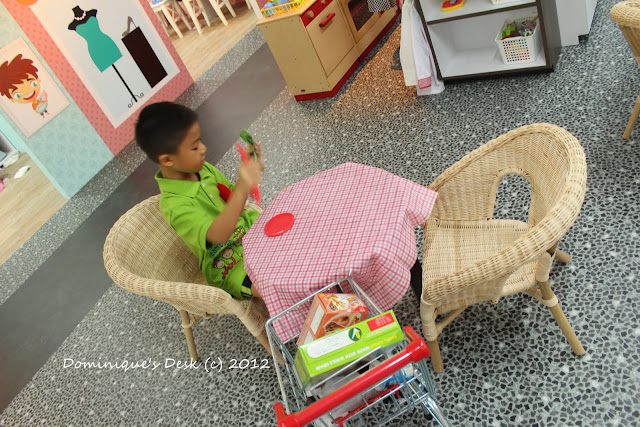 Taking a break after grocery shopping 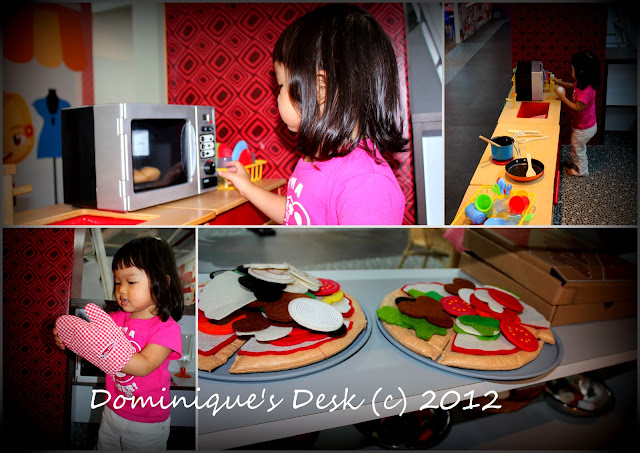 In the centre of the city was a small kitchen area. It was fully equipped with an oven, stove and microwave.  Tiger girl got to work cooking pizza. She has seen her older brother heat up frozen pizza to eat in the oven and promptly tried to do the same too.

It is a fully stocked kitchen with all the utensils,  electrical equipments and groceries required for cooking.

It would be great if they could add in another stove or cooking area as I can for see that it can get very crowded and difficult for more then 2 chefs to operate at the same time if it happened to be very crowded that day. 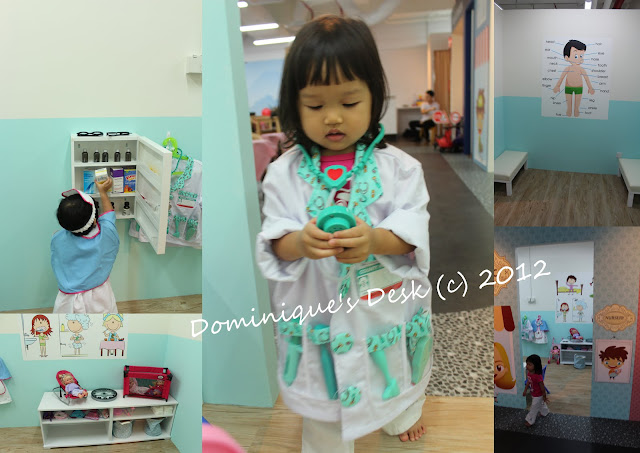 The next area which we went to was the Clinic where the kids get the chance to dress up as either a Doctor or a Nurse. Tiger girl decided to try out the doctor’s outfit as she was fascinated by the stethoscope.  There was a small corner where the doctor could attend to patients while on the other end of the room was a baby changing area complete  baby dolls, strollers,  outfits and diapers. 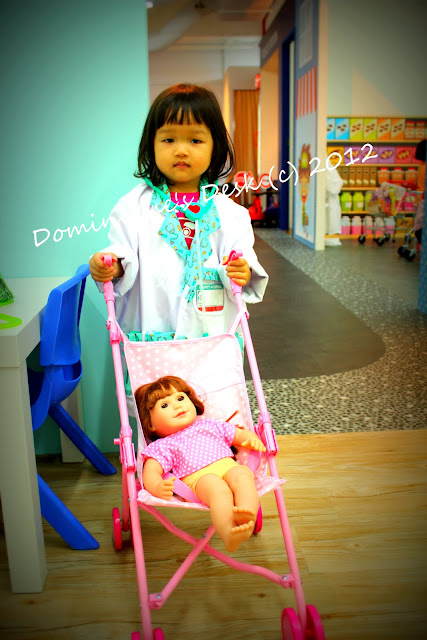 Dr Tiger girl with her patient

After scrutinizing the room Tiger girl decided to bring her patient out for a walk instead so off they went for a walk around the city.

The chance for the kids to play dress up as nurse or doctor.

The set up of certain items like the metal medicine cabinet situated so near to the play clothes is less then desirable. Kids who are standing on either site of the cabinet risk getting hurt if the metal door is accidentally swung over to the other side as they are not able to see the person on the other side.

I would like to see a proper doctor clinic set up and even waiting area for patients. 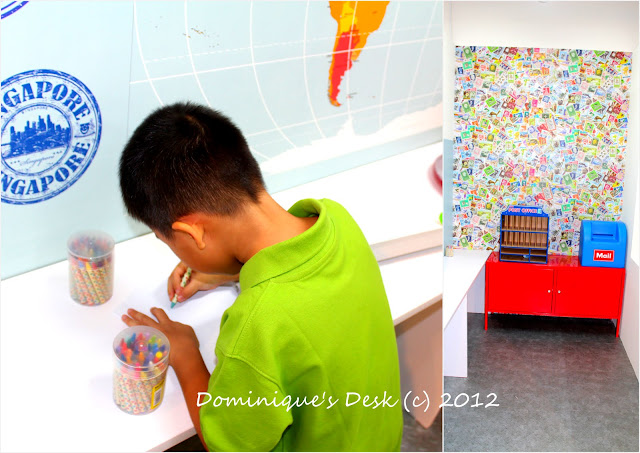 Doggie boy took the chance to write and send his own letter at the mini post office. He didn’t bother to post the letter sighting the fact that he knew the letter won’t be able to reach the recipient as there were no stamps available to mail the letter.

There were very few props in the area. It would be great if there were a postman costume for the kids to try on an a franking machine so that the  are able to really try out the process of how the mail is processed in a real post office. 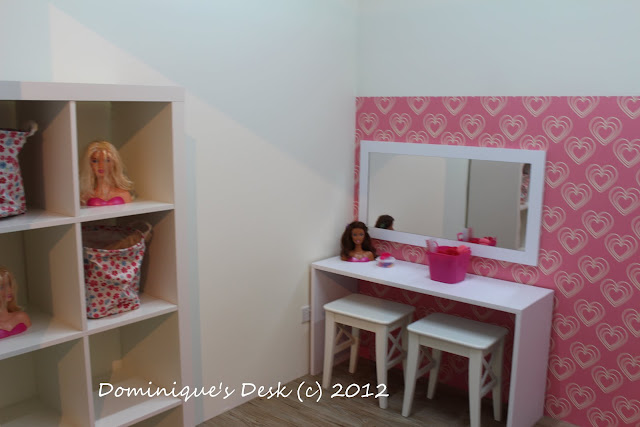 Next to the post office was the Hairdressing Saloon which had  doll heads and various accessories to style their hair with. We gave this room a miss as Tiger girl wasn’t interested at all in stepping in and playing with the doll heads. 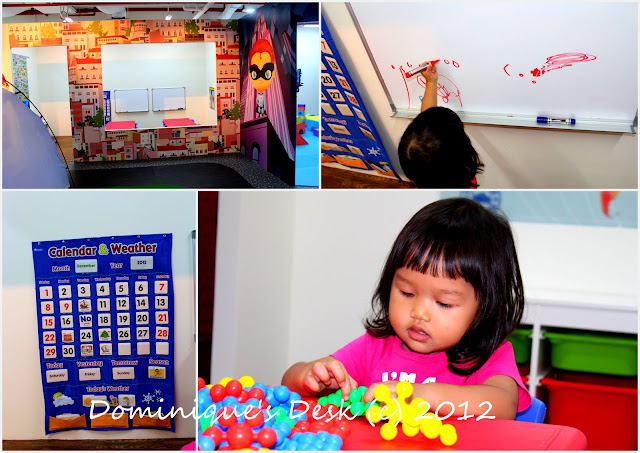 The classroom was on the other side of the post office. Tiger girl tried out doodling on the whiteboard with the whiteboard markers and fixing some of the puzzles which they had inside. However her interest started to wane and she wandered out of the classroom as she found the bubble like contraception too difficult for her to piece together.

The  set up is just nice for a toddler’s height however Tiger girl complained that the chair was too low for her and it wasn’t comfortable to sit on due to the height.  I had to stack up the chair so that she would be able to sit comfortably.

I would like to see more charts and even morals on the walls of a classroom as it would make it more cozy and inviting. 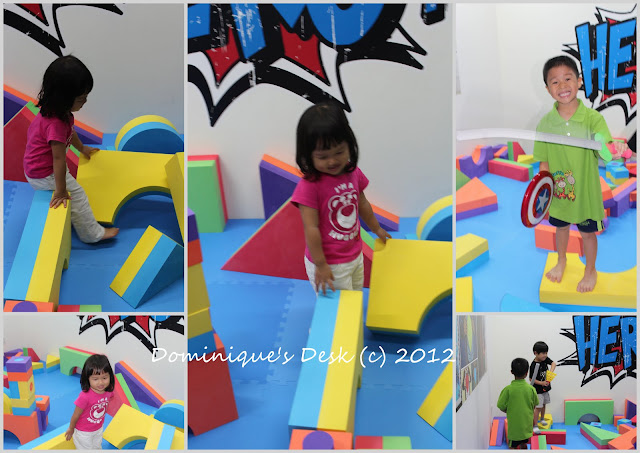 The Super Hero Corner was the last room in the city which  the kids tried out. There there were foam blocks which you could use to build your own city. The boys had the most fun in this room playing with swords and creating their own city. 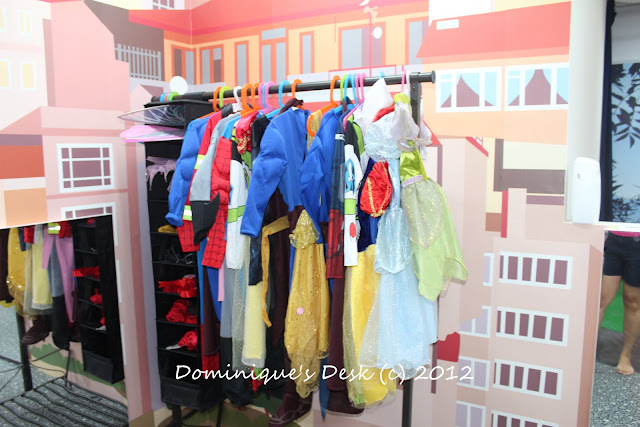 There is a wide range of costumes which one could try out and wear before entering the super hero rooms but my kids gave this a miss as they found it cumbersome trying out costumes. 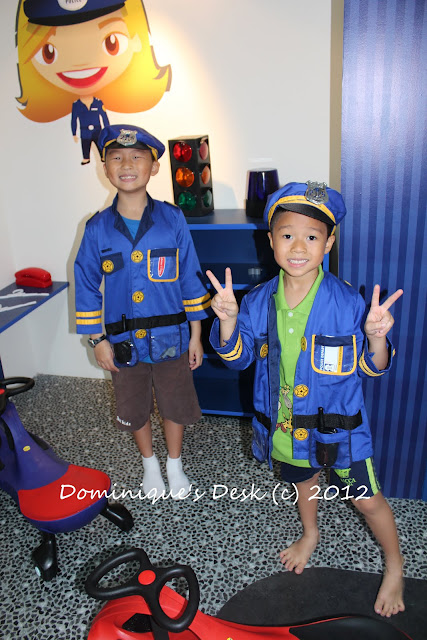 The policemen outfit were the only outfit that the boys tried on that day. They were fixated to going around and chasing after each other on the plasma cars. I was less then happy to see them zooming off on the cars as it could be dangerous if they accidentally knock into other smaller kids which were around. It would be a catastrophe if they had run down a unsuspecting pedestrian while hot on pursuit after a criminal.

I had to make them stop after awhile as they were getting too excited chasing after each other.  The boys promptly replied that it wasn’t fair and there wasn’t any other things left for them to do at the city. BORRING!!

In all I feel that the city would be a more enjoyable place for girls then boys and that there should be more activities which boys can carry out safely without being a hazard to themselves and other kids.

The place is more suited for  kids aged 2-5 yrs old as older kids like my boys who are currently 6 and 8 would be bored after an hour or so as not all activities were appealing to them.

The City could do with more staff on hand and if I were not there to supervise my kids while they play I am sure that they would have gotten into scraps as there are no clear rules and regulations on what can or cannot be done.

There were only 2 staff on duty that day. One was minding the counter while the other the play areas. I find that this is insufficient as the entrance to the play area is not  fenced off.  Kids may wander out or even get kidnapped without the parents being the wiser.

Another issue that I had was that they didn’t even ask the kids to sanitize their hands before entry and you never know what germs they may pick up while playing. The policemen outfits came with whistles which I had to stop my boys from blowing. I literally snatched them away from their hands while they were attempting to put it in their mum to blow as I can’t afford for them to fall sick or catch a nasty bug during this festive season.

Disclaimer: We were given a media invite to  The City. All opinions are 100% my own.