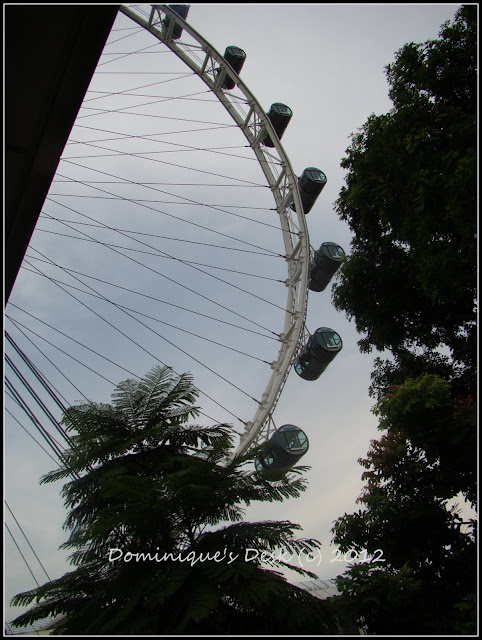 The kids had been looking forward to this trip as they have been wanting to ride the Hippo bus and go on the duck tour as they haven’t been on those two rides. The boys have been on the Singapore flyer before as they went on it once with their grandparents.For Tiger girl, R and me  it would be our first time on the flyer as we haven’t tried it yet. 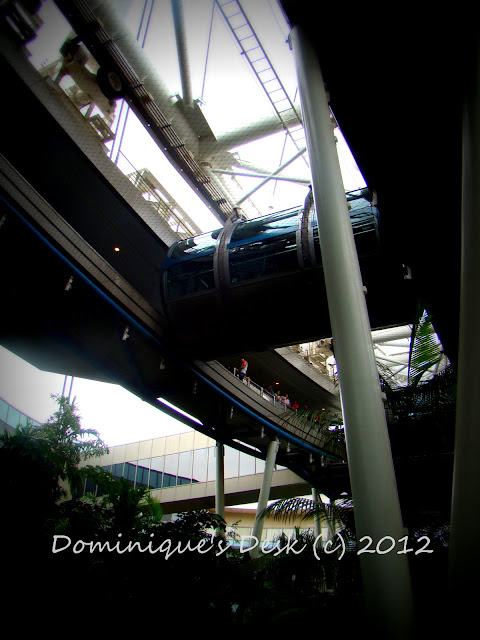 One of the capsules of the flyer  taken from below.

The event was scheduled from 5pm to 7pm and we were there slightly early so that we would be able to find the meeting point easily.  By the time it was 5pm there wasn’t a appointed guide who approach us and gave us directives on how we were to obtain our tickets. I had to wait quite awhile before I was even attended to and the complementary 1 adult and 1 kid ticket was issued. Also some of the people in the group were fashionably late and we had to wait  45 minutes before we could move off to the first ride. By then the kids were extremely restless and kept on asking” Why aren’t we going yet!!” every five minutes or so.

I too was annoyed by the lack of planning and having to waste time waiting for people who were late and didn’t even apologize for holding up the group and wasting everyone’s time.

The event management was really bad!!! 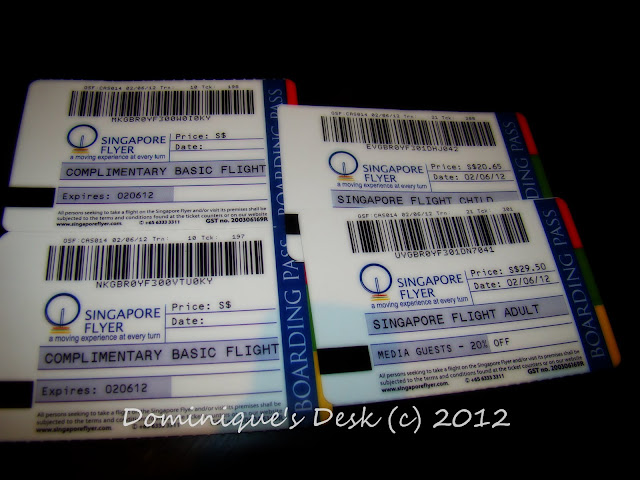 I had to spend $23.90 for an additional adult ticket for R and $16.50 for a kids ticket for Doggie boy as the sponsors were not generous enough to sponsor our whole family for the outing.  It worked out to $40.40 for the additional tickets. (This doesn’t include the $10 that we had to spend on car park for parking there for more then the estimated 3 hours). 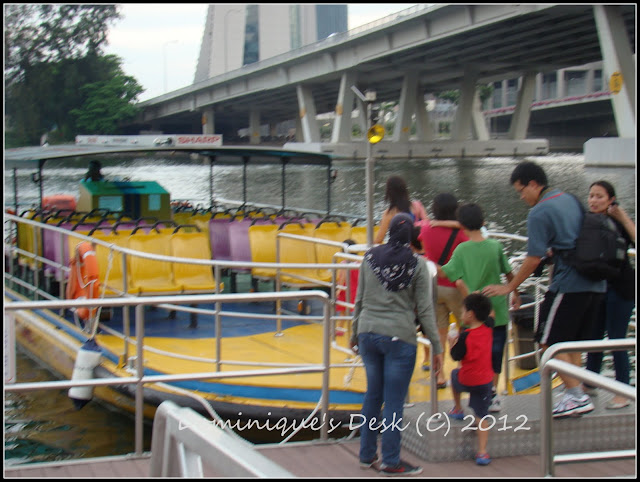 At 5.45pm we went to the jetty to board the boat. Imagine the disappointment on the boys faces when they realized that it was a River Cruise boat instead of the Duck Tour Boat.  We promised them that they will sit the Duck  Tour boat the next time when their grandmother comes down from HK. Nevertheless  the boys grudgingly boarded the boat for a ride. 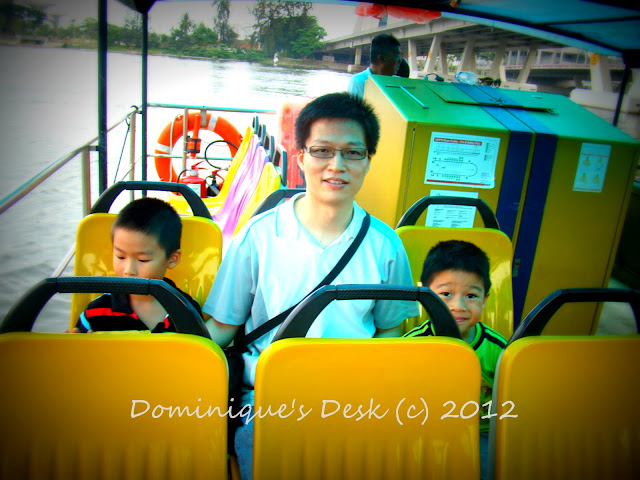 Tiger girl didn’t want to sit next to her brothers as she chose a purple seat which matched the colour of the dress she was wearing. 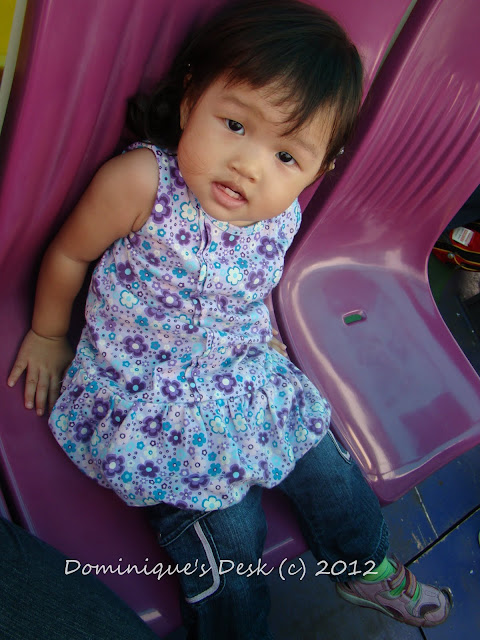 The view from the boat was great. There was an open space at the front of the boat and it allowed me to take pictures of the sunset as we cruised along from the jetty round marina bay. 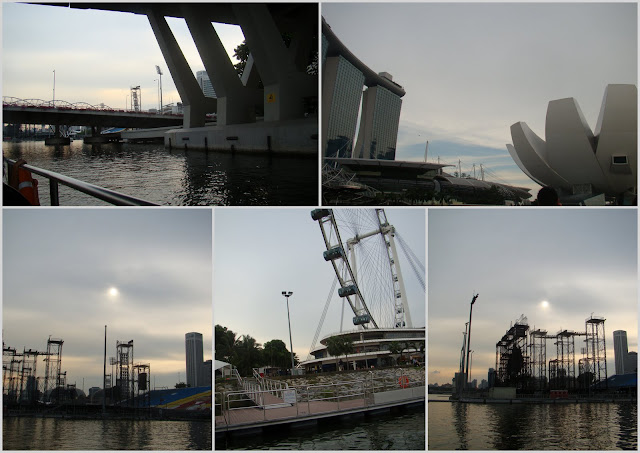 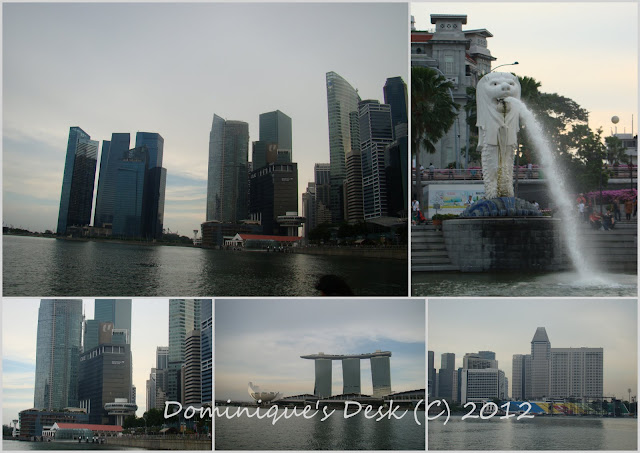 The boat ride lasted half and hour and before long we were back at the jetty and headed onto our next ride which was the flyer itself at 6.30pm. We were escorted all the way to the flyer and were given the priority line queue so that we would be able to complete our adventure without further delays. 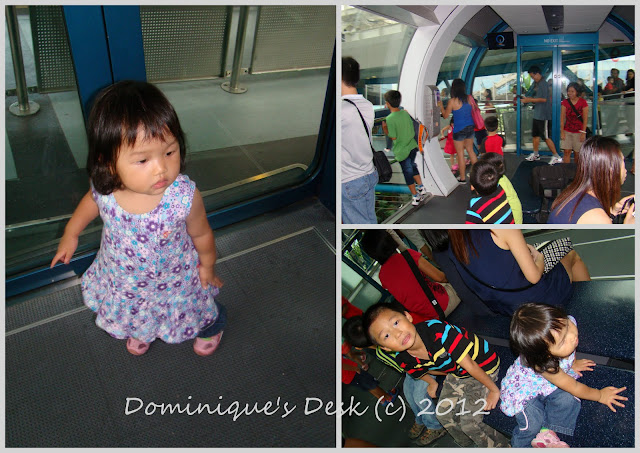 The kids were initially glad to step into the capsule however they started to get restless again while it was making it’s round. 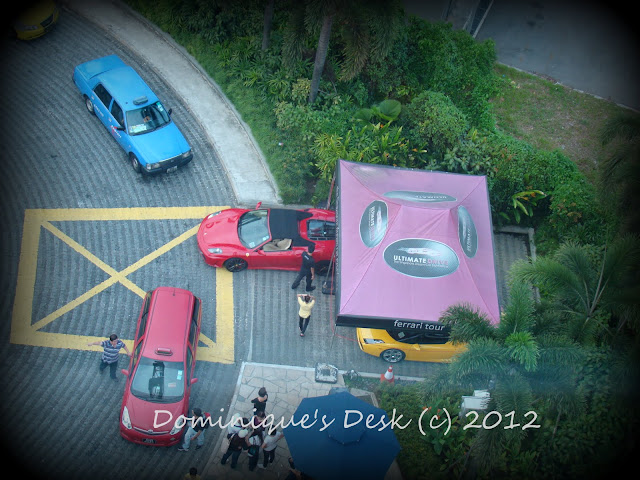 The boys were more interested in the Ferrari cars and going fast then being stuck in the capsule. Monkey boy commented that we were rotating at a snails pace and why can’t the ferries wheel move any faster. I had to explain to him that the rotation was done gradually so that everyone could admire and soak in the scenery from the different heights while the capsule makes it’s one complete rotation. 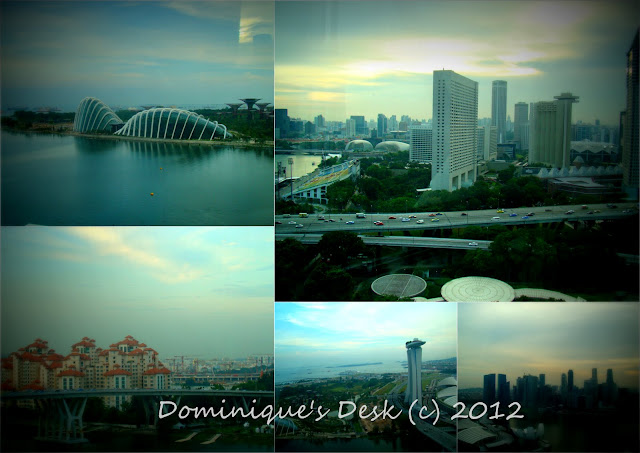 The view from the flyer was absolutely stunning . R and I agree that it was the highlight of the evening to be able to soak in the magnificent sights. The kids however had a different view from us and couldn’t wait for the ride to be over. 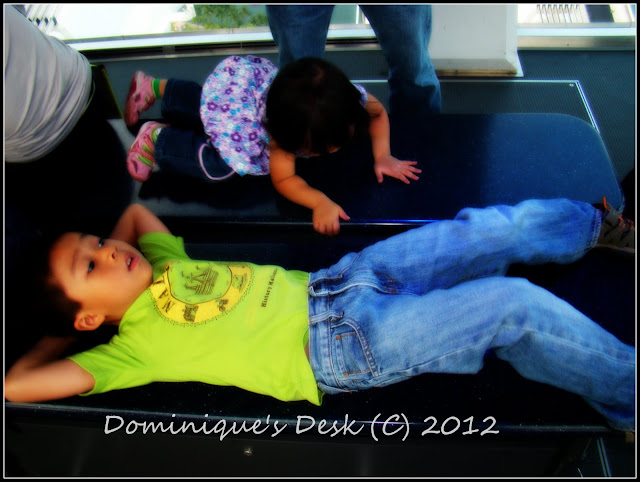 It seemed to be taking forever to go one circle as according to Doggie boy. He grew tired waiting for the capsule to complete the whole circle and laid down on the bench for a rest. 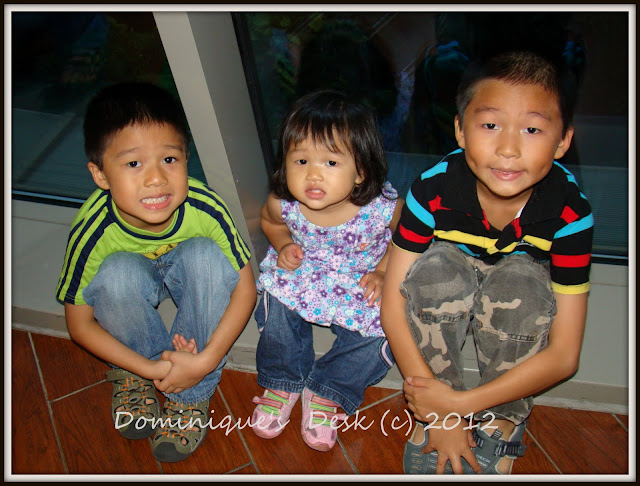 The last stop was  the Hippo Bus tour of the city. The route that they took was from the Singapore flyer, down to the esplanade, Clark Quay, Chinatown and back again.

I didn’t manage to take a shot of the bus before we boarded it but here is a shot taken after alighting from it after the tour. 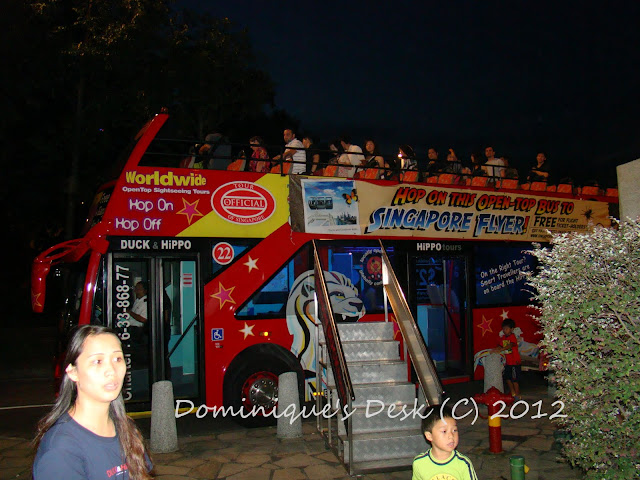 The kids didn’t really fancy sitting on the top and Doggie boy kept on complaining that it was too hot and he wanted to retreat to the lower deck where there was air-con.  I stayed on the upper deck and took some shots of the city at night. 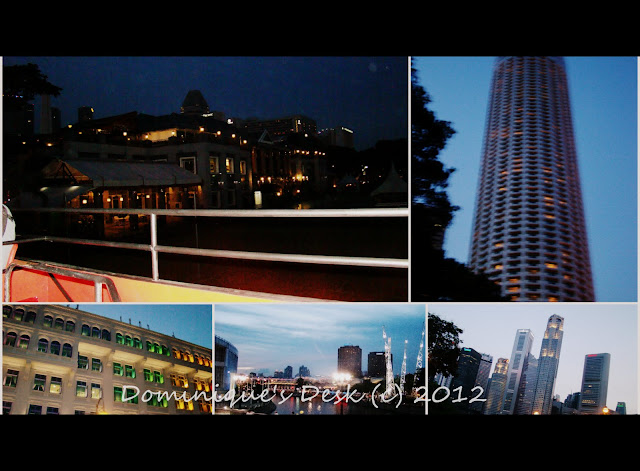 In all it was a real adventure for us and this package would certainly appeal to first time vistors to Singapore.  The staff at the Singapore flyer were cheerful and  professional in carrying out their duties however this wasn’t the case for the organizers of this Omy event.

It would have been a better experience for me and my kids if there was better co-ordination and planning done on the side of the organizing committee. The kids were starving when it ended at 7.30pm (half an hour later then scheduled!!) and we had to rush off to settle their dinner before heading home.

Disclaimer: I was invited on this adventure through omy.com on behalf of Singapore flyer. This adventure  was partially sponsored by Singapore Flyer. I paid for 1 adult and 1 kids tickets out of my own pocket for our family of 5 as ONLY 1 adult ticket and 1 child ticket was sponsored. All opinions are 100% my own.

Visit to the Army Open House SOC: Spending time with the Kids