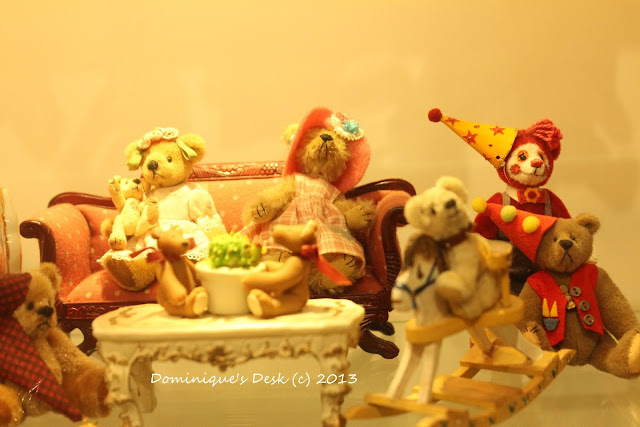 Teddy bears in the living room

Relationships are something that can be very complicated. It is something that needs constant working on to make it last.  It takes effort on the part of more then one individual to create the relationship which you would like to have.

It take both parties to make a conscious effort to make  the relationship work. It is a delicate balance which dynamics is constantly changing.  The needs and desires of the persons involved in the relationships also changes as they age or grow up.  It is not easy however with much effort by all parties involve it will survive the test of time.

I find that it is really pathetic for parents to make lame excuses for the adult kids who did not turn up for the birthday celebration of the matriarch of the family. Sometimes they don’t even bother explaining why their kids are skipping family functions/new year celebrations and just turn up alone.  To me it shows that they do not value relationships or teaching their kids the importance of maintaining blood relationships.

Future generations and the next generation will never be close to each other as the kids were never given the chance to build up bonds with each other. The older generation sometimes don’t think much about the reaction behind their selfish intention of being “nice” to their children by giving in to their whims and fancies that they are in fact harming them indirectly.  Cousins will not know much about each other and their children too will be distant from each other.  Even if they do see each other once a year or once in two year there is no interaction or treat each other like strangers.

Sometimes when one party doesn’t make the effort or starts to take advantage of the relationship all trust and respect which had build up over the year goes flying out the window.  Sometime the relationship fractures into pieces and it maybe in your best interest to discard the broken relationship then to pick up and try to mend the broken pieces. It just isn’t worth it working on a hopeless relationship.

Blood relations DOESN’T equate to FAMILY. To me it doesn’t mean that because that  person is your aunt or grandaunt or cousin he/she is FAMILY.  FAMILY = people who really care and show concern for each other.  The people in the family will not look down or backbite each other. They put the other person’s interest first before self and really value you as a person to be with you. They are people that you can rely on irregardless of the situation you are in.

What have you been thinking about this week?

Today I’m participating in the Ultimate Blog Swap. You’ll find me posting over at Ashley Pichea about Fun and Active Devotion for Kids, and I’m excited to welcome Heidi to Dominique’s Desk: jars on shelves © by cainmark

I’m a baby person. Ask my mother, who bought me countless baby dolls and dresses and strollers and bottles, “Does Heidi like babies?” And she’ll laugh at you with the knowing chuckle only a mother can use and tell you about the way I’d rush home from kindergarten just so I could hold my new baby sister for hours on end and cried that I even had to leave her in the first place. I actually hated kindergarten because it meant I had to leave “my baby.” Who hates kindergarten? Apparently me, and all because of a baby. Babies are my thing. Always have been.

I had my first baby – Gabe – seven and a half years ago, and I’d be lying if I said caring for my first “real” baby came as easily as did caring for my baby dolls all those years before. Make believe is like that, I suppose, but I also have to add that I loved my real baby boy with a fierceness those dolls never knew.
Earning his smiles, hearing his coos and watching this little person thrive and learn and become under my nurturance surpassed all my imaginings of what motherhood entailed. It’s really one of those things that sounds so cliché that I don’t even want to write it, but he became the incontrovertible light of my life, and I mothered him with everything I had.

And then? Well, somewhere along the way he started growing up! My soft-cheeked, giggly little baby became a boy – a boy with thoughts and ideas and opinions of his own, different from the ones that come naturally to me. He loves Star Wars and wrestling and woodworking and the requisite boy things like playing in the mud and laughing at bodily functions, none of which speak to my soul the way they speak to his. Or really speak to my soul at all. Especially the bodily functions one.

That one is so not my favorite!

Volunteering at his school last week I stopped into the principal’s office to say hello and she referred to him as a “guy.” A guy! When did my baby become A Guy? But she’s right. He’s a guy, his own person.
He was all along, of course, but it’s becoming so much more evident as he’s moved beyond his babyhood and preschool years and embraces his childhood years with abandon.

You could chalk it up to me being more of a baby person or you could attribute it to the general changes that come from moving through different stages of life. My husband and I have also experienced
secondary infertility and several miscarriages and loads of depression since having him, and I tend to think those things played as much of a role as the other things. But lately I’ve noticed a growing disconnect between him and me, and it doesn’t sit well in my heart. Not well at all! It’s even more pronounced now that we’ve been fortunate enough to add a second child to our family, a little girl who was born in January. Now when Isla cries I’m transported back to those early days with Gabe, days that remind me of the sweetness of loving and learning my first little guy.

I know kids mature and change; I’m ready for that, at least as much as any mother’s ready for it. I want him to grow and I want to see him develop his independence and his voice and his passions. But being the mother of a baby-who-too-quickly-became-a-toddler-who-too-quickly-became-a-preschooler I know our time is sacred, and I want to cover that disconnect now, before he turns into a tween and then a teen and it becomes that much more difficult.

I’m so excited about this idea. We actually used it once when he was younger and had great success with it, and I think he’s looking forward to our updated version as much as I am!

The basic premise of our Jar of Fun is that the best relationships are founded on positive interactions.
Gabe is strong-willed and I often find that for every ten corrections and cautions I’ve given him I’ve only given him one positive interaction. This results in an overall negative tone to our relationship, one where he starts groaning before I even start speaking and I get frustrated before he’s even had a chance to sigh or sass. Our Jar of Fun is a way to build in some excitement, positivity and encouraging language into our days.

Our Jar is a daily jar, but there’s no reason the schedule couldn’t be adjusted for a busier family. The point is that it’s regular and it’s important and it isn’t delayed because delay is more convenient. Our Jar is a priority because our relationship is a priority. I think this is a powerful message for kids, especially with kids for whom connection doesn’t come easily.

Making our Jar was easy – I hit up my favorite local discount store (for me it was TJ Maxx) and found a jar I liked, one that fit with the rest of our décor. Any dish or box would do, but I liked the idea of making it visually fit into our home, which also served to make it a little special. I sorted through my scrapbooking stash for patterned paper scraps and I made 30-40 little strips on which I could write one fun thing. These will be very age and family specific, of course, but I’m including a pdf of some of the
ideas we’re using this time around.

A few notes about the strips:

1. Consider involving your child in the list of activities to be included in the Jar of Fun. If you do so, make sure each idea is manageable, available and affordable. This might be a really great way to connect in and of itself and be a great springboard for interesting conversation.

2. Consider not involving your child in the list of activities. Personally, I prefer this option. G how this could create a few difficulties! I’ve learned along the way that we connect better when I take the lead on our “connection activities.” When I plan things I try to keep his interests in mind, but I’m prepared for him to resist until he gets going simply because it’s my idea and not his. By the time we’re in the middle of the activity, however, we’re both having a great time.

3. Don’t reinvent the wheel! Some of the best activities we’ve done have been the simplest.

4. Keep in mind your child’s love language(s). If you haven’t read the book The Five Love Languages of Children by Gary Chapman it’s worth the read, especially if you have a difficult child. I know Gabe feels most loved when he receives presents. So I try to build in a few activities for our jar that involve him getting a present or two.

Logistically speaking, we set our jar on the kitchen counter and each night before bed we pick out our next day’s random fun activity and write it on the calendar. This gives us something to look forward to as well as allows us to either adjust the schedule as needed or make another pick if we can’t make the first one work.

The first time we tried this I was skeptical it would work; we had very little extra cash available and I didn’t think many of our activities were particularly interesting or spectacular. But I underestimated how much joy my little boy would derive from knowing I wanted to have fun with him – every single day.

Anticipating our special time together became a huge delight for both of us and worked wonders at changing the positive-negative balance in our relationship for the better. I also think it speaks volumes that he’s so excited to start our jar again. And of course I’m looking forward to.

I know I’ll never go back to those baby days with him where things come naturally to me and I know what to do and love (almost) every bit of it. But I can be certain to keep doing the little, simple things like this to maintain the benefit of a connected relationship.

What do you do to reconnect with your  children
when they’ve grown a little distant?

“Once a teacher, Heidi is now the mother of two sweet children – Gabe (7) and Isla (4 months).  She enjoys taking photos, writing, running and reading and is constantly pushing herself to trade negativity for gratitude and beauty.  She blogs at www.slightlycosmopolitan.com about parenting, infertility, depression, and faith.”
1 2