Word on the Street Junior- The Wacky Tug of Words

A few weeks ago  I received a copy of Word on the Street Junior from Pamela of  My First Games. This game is unlike any other games which we have reviewed so far.  Published by Out of the box this game is aimed at testing the players prowess in spelling based on the categories which they have drawn from the card pile. 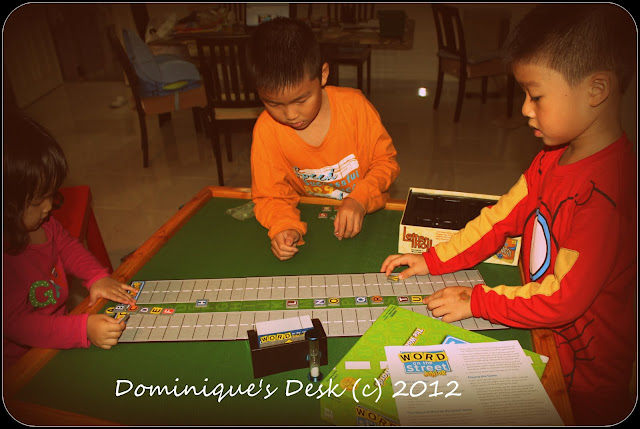 Designed for  2-8 players this game is recommended for Ages 8 and up.  Each player has to draw a card from the pile and decide on the word to spell before the timer runs out. 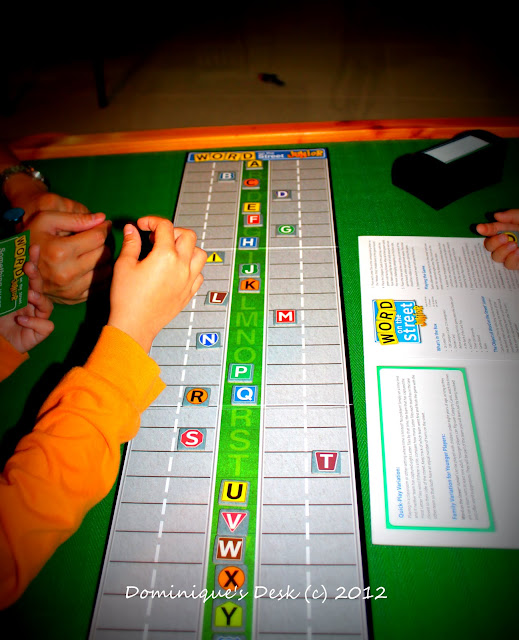 The players are grouped into two  teams (A and B). They take turn to move the alphabets used to spell the words to their side of the board and win the game when they manage to move 8 pieces of the alphabet off the board. 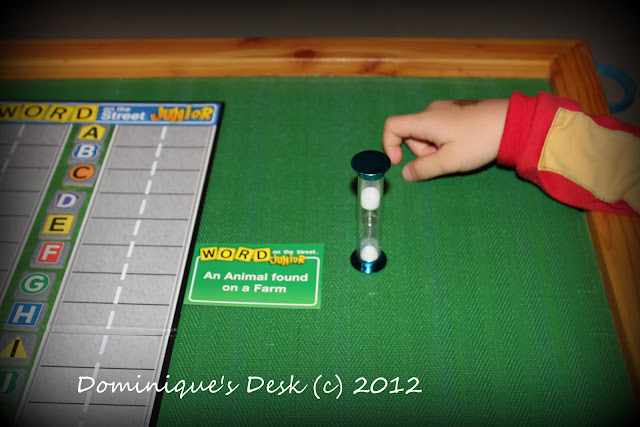 The timer starts when the card is pulled from the pile. “An Animal found on a Farm” was one of the cards which Doggie boy. By the time the timer ran out he had come up with the words-cat, dog, cow, sheep and hen. We decided on the word “sheep” and move the letters s,h and p one step right while the letter e was moved to the right twice.

The game needed a lot of thinking and strategy to be win. We were not able to clear 8 tiles off the board as it got extremely difficult spelling out words when most of the vowels were removed during our early “captures” on the board.

The boys gave up after some time as it was getting too difficult to form words without the vowels around.  It clearly takes a lot of skill to get the non vowel alphabets off the boards first before the vowels.

I asked Pamela on how to play the game and she mentioned that you could still use the vowels and letters that were captured which were off the board. However I feel that it would be hard to calculate how well the kids fared in the game. After discussing with R we decided to leave the vowels in the next time we play the games with the boys instead.

I find that it is an excellent game to stimulate a child’s interest in spelling. It also helps indirectly build up their vocabulary which would aid them in the understanding of comprehension and writing of compositions.

You can get a copy of this game online from My First Games.  It retails for $45.90.  However for the readers of Dominique’s Desk you are entitled to a special discount..

Use the Coupon code “DOMDSK-WOTSJ30” to buy Word on the Street Junior at a special price of S$30. While stocks last, or up till 14 August 2012, whichever comes first.

Disclaimer: I received a copy of Word on the Street Junior from My First Games for review purposes. All opinions are 100% my own.