Getting ready for Primary One- A Reflection 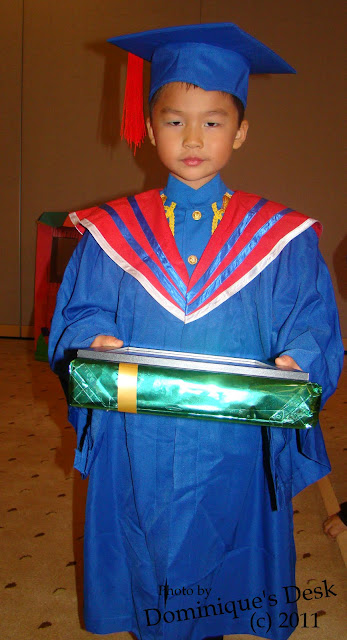 Monkey boy in his graduation gown when he was in K2

It has been nearly four years since Monkey boy entered Primary school. I remember back then when he was in K2 I had to decide in July/August which school I should send him to.

It was a very important decision back then as his entry to the Primary school of my choice would mean that I didn’t need to worry about Primary One admission for his siblings as it would mean a guaranteed entry for them.

In 2011 I wrote about Preparing for Primary One detailing what I had done while preparing Monkey boy for Primary one.  The registration processed hasn’t change that much since there.  The only difference is that  registration for Phase 2C  can be done online and Citizens are given two ballot slips in the event of a ballot at their chosen primary school.

I’m sure you know how important it is for a child to have a good and solid foundation from young in order to succeed in life.   I believe in not putting my child in a pressure cooker environment or one that can stifle his growth instead of promoting it.

It is with this in mind that I chose a school that wasn’t overtly focused on academic excellence and promoted  holistic development of the child.  The school also had to be able to cater to the different learning styles and pace of my 3 kids.

I am lucky that I was able to see experience first hand the learning environment in the school that the boys are currently studying in.  I had the privilege to teach at that school for two years before going on NPL when Tiger Girl was born.

You can say that I am well versed with the culture of the school and know both from an educator and a parents view how the Singaporean Education system is like. I know the positive and negatives points of it and how to help my kids get the best out of it.

Even though academic results do play an important part in opening doors to further education learning morals and values are what will see you through the rest of your life.  An A+ report card means nothing if one is lacking the EQ and other survival skills.

I wasn’t that concerned with the technicalities of admission when it was time for Doggie boy to be registered for Primary One. With his elder brother already in school he was already guaranteed a place under Phase 1.

I decided to focus on the physical and mental preparations that I went through with him and  wrote the series – Preparing for Primary One the 2nd time around.

Now that he is in Primary Two and have gone through the first year of school without any issues it has reaffirmed that I have made the right decision back then on which school to send the kids.

Are you among the group of parents registering your kids for Primary One this year?

How would you be deciding on where to send your child?

Zipping Around this June Holidays Exercising and Having Fun