West Side Story – A Review

Romeo and Juliet inspired  play West Side Story has recently hit the shores of Singapore. The Musical by Arthur Laurents with music by Leonard Bernstein opened at the Mastercard Theatres at Marina Bay Sands earlier on this week on the 13th of September.

I was lucky to be invited  to view this musical and it was my 1st time stepping into the Mastercard Theatre to watch a show.  As the show was not suitable for under 16s   due to the adult themes I brought a long a friend to watch the show together with me and we had a blast. 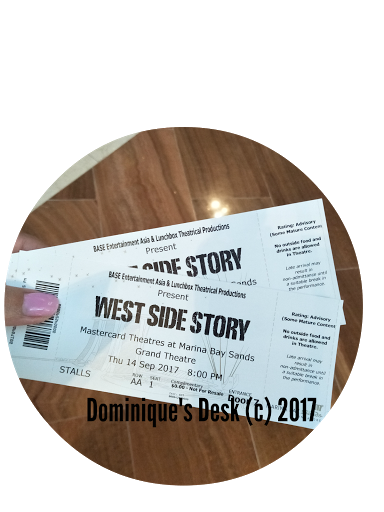 Our tickets to the preview of West Side Story

Set in the mid 1950s , the tragic love story between a Puerto  Rican girl (Maria) and a  White American (Tony) was portrayed by an all American cast.   The lead actor Marc Koeck as Tony opened up the play with an impressive rendition of his solo ” Maria”. The lead actress   Natalie Bellenger as Maria appeared on stage shortly after and they engaged in the duet  “Tonight”.

Instant chemistry was clearly evident between the leads and the hostility between the rival  street gangs the  Puerto Rican Sharks and Jets, a white gang could be strongly felt by the audience through a mixture of  dance and song. There were elements of pop, funk and jazz brought out through the bold movements of the dancers as they pranced around the stage effortlessly.

Watching the musical brought back memories to the time when I was performing on the violin as part of the live ensemble  during my secondary school days for the plays that were put up as part of the school’s anniversary celebrations.   It has been a really  a long time since I have heard a live orchestra and dancers belting out tunes while dancing on stage. Capturing a shot with Amie of @mamamiethots before the show started

The first half of the 155 mins musical moved rather slowly as the shenanigans of the rival gangs were played out.  The pace picked up after the intermission and it ended on a “bitter sweet” note after the shootout which resulted in Tony’s death.

The West Side Story is still showing nightly at the Grand Theatre, Mastercard Theatres  at Marina Bay Sands till the 30th of September. (You can still catch it while you can!!)

*Only applicable to E Reserve ticket.
Terms and Conditions apply.

Disclaimer: I was given 2  tickets to view the musical West Side Story. All opinions are 100% my own.