In the last installment of this series I covered the rubrics that was used in marking English Composition. This  post I will be touching on some common mistakes that I have seen while marking the examination scripts of my students. 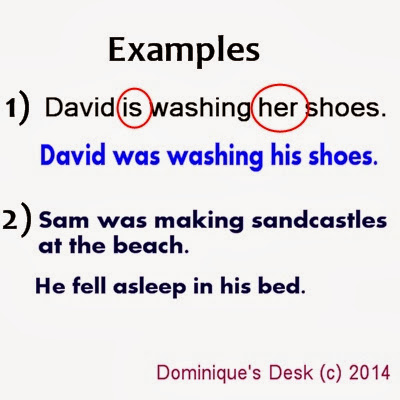 In example Number 1  there are two common mistakes.

Very often when a student is writing a composition he may get confuse about which tense to write in- past or present. If he is writing a recount he should stick to writing in past tense. However if he is doing a factual or literary piece it is acceptable to use present tense.

Stick to the same tense throughout the composition.  Do not alternate between past and present as it will only make it difficult  to understand what you are trying to convey and as a result you will get marked down under Language.

Mistake  2- Changing the gender of the character.

If you are writing about a boy do not change him into a girl halfway into your essay.  He and She are not to be used interchangeably.  No doubt there are transgenders but for clarity of writing in an essay a boy should remain a boy and a girl should remain a girl.

Sam was making sandcastles. He fell asleep in his bed

Reading these two sentences would definitely make one do a double take. There is no linkage between the first sentence and the second. The two sentences would work fine by themselves but putting them side by side and one after the other makes the story sound illogical.

I’m sure you may have these thoughts running through your mind.

– Sam was at  the beach. How did he get back home so fast?

– Does it mean he brought his bed together with him to the beach so he could fall asleep in it?

– Sam must have some special teleporting skills to allow him to be at the beach at one moment and at home the next.

It would be more logical if he had written this way.

Sam was making sandcastles with his sister at the beach this morning. They made really lovely looking structures with the sandcastle kit which mum had purchased for them. They were at the beach the whole morning and he was exhausted by the time they reached home at noon.   He fell asleep in his bed once his head touched his pillow.

In the above paragraph you can see the  clearly how the changes unfold.

– Change in time frame (Moving from Morning to afternoon)

– Change in location( From the beach to the home)

By being aware of these common mistakes one will be able to diligent while writing an essay.

In the next installment I will be touching on  the changes to the marking  English Composition in PSLE come 2015.